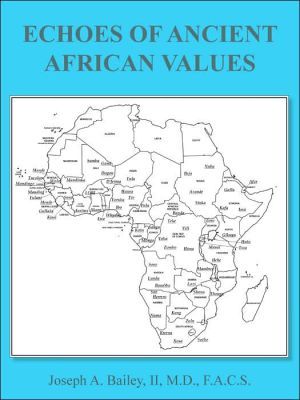 Ancient Africans, perhaps around 5500 BC, established a tradition based upon truth, goodness, beauty, and other immaterial and intangible aspects of things of worth. Believing all of God's creations were forever linked, they focused on having good relations with and behaviors toward fellow human beings and with nature - both for the purpose of reaching a heaven afterlife. Out of these concepts arose the sense of community, including the practice of no person being left behind. Echoes of Ancient African Values discusses who Ancient Africans were as a people; their genius and creative ways of thinking; their philosophical and spiritual foundations; and their world shaping achievements. Unfortunately, peoples throughout the world have failed to realize or acknowledge the fact that Ancient Africans have produced the most brilliance civilization and culture the world has ever known. This applies whether the measure is by significance, greatness, or numbers. The fashioning of such brilliance inside high morals not only transcended space and time but also designed sublime echoes. A major premise of this book is that these echoes were extremely instrumental in enabling Ancient African slaves to survive their hellish situation as well as having ongoingly contributed to the recovery of Black Americans from the effects of slavery. Numerous examples are given. Otherwise, what is stressed to all peoples in the world is that Ancient African Values contain workable answers for solving every type of problem concerning humanity.