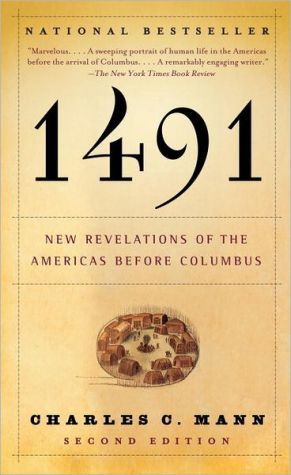 New Revelations of the Americas Before Columbus

A groundbreaking study that radically alters our understanding of the Americas before the arrival of the Europeans in 1492.

Traditionally, Americans have learned in school that the ancestors of the American Indians crossed the Bering Strait 12,000 years ago, existed in small, nomadic bands, and lived so lightly on the land that much of the Americas was wilderness when Columbus set sail. But as Charles Mann makes clear, in the last 20 years archaeologists and anthropologists using new research tecniques have proven these and other long-held assumptions to be false.

He shows us how a new generation of researchers came to the persuasive conclusion that more people lived in the Americas in 1491 than in Europe; that certain of their cities, including the Azetc capital, Tenochtitlan, were greater in size than any European city; that these much learger societies were also older and far more advanced than had been thought (the Indian development of corn is still the most complex and far-reaching example of genetic engineering known); that the Native Americans managed their environments in ways that, if replicated today, could revolutionize local agriculture.

1491 sheds clarifying light on the methods by which these discoveries where made, how they have rewritten part of our history, and how they contribute to today's environmental disputes. It is an impassioned and erudite account of scientific inquiry and revelation.